As a bank that owns and operates an ATM network that manages deposits from a large number of customers and has a nature similar to that of public infrastructure, the Bank recognizes that ensuring disciplined corporate management is vital in responding to social trust and seeks to ensure effective corporate governance. This is achieved by maintaining and improving corporate governance and compliance systems to ensure transparent, fair and swift managerial decision making; clarifying the roles and responsibilities of executives and employees; strengthening management oversight functions; and ensuring equitable operations.

The Bank adopts the organizational form of a Company with Audit & Supervisory Board Members. At the Board of Directors, the Bank ensures effective corporate governance through decision making by Directors with executive authority over operations who are well versed in the Bank’s operations and Outside Directors who have considerable experience and insight in their areas of expertise as well as through the audits by the Audit & Supervisory Board Members.

Numbers and Proportions of Outside officers

Toward Further Enhancement of Our Governance System

At the 19th Ordinary General Meeting of Shareholders, held on June 22, 2020, the Bank changed the Articles of Incorporation as indicated below

As of June 23, 2020, the Bank’s Board of Directors consisted of seven Directors, including four Outside Directors. The Board of Directors meets, in principle, once a month to decide the Bank’s basic management policies and important operational issues and to supervise the execution of duties by Directors with executive authority over operations and Executive Officers.
The Board of Directors has established the Executive Committee as a decision-making body concerned with operational implementation within the scope delegated by the Board of Directors. In principle, the Executive Committee meets on a weekly basis to deliberate the implementation of important operations, including the formulation or amendment of business plans; the acquisition and disposal of assets; credit provision-related issues; the payment of debts and expenses; credit management issues; rewards and sanctions for employees; issues related to employees’ working conditions and benefits; the establishment, change and abolition of elements of the organization; and the formation, revision and elimination of rules and policies, in addition to conferring on issues to be deliberated by the Board of Directors prior to its meetings.
Since June 2006, the Bank has adopted an executive officer system, and the Executive Committee comprises Executive officers

As an advisory organization to the Board of Directors, the Bank has established the Nomination & Compensation Committee, chaired by an independent Outside Director. The committee is delegated by the Board of Directors to recommend candidates for Director to be put on the agenda at a General Meeting of Shareholders, to recommend candidates for Executive Officer to be put on the agenda at a Board of Directors meeting and to supervise a plan on successors to the position of Director, etc.
The Nomination & Compensation Committee shall deliberate the following matters regarding the Bank’s Directors and Executive Officers:

Independence Standards for Outside officers

The Bank’s Independence Standards for Outside officers are as follows: 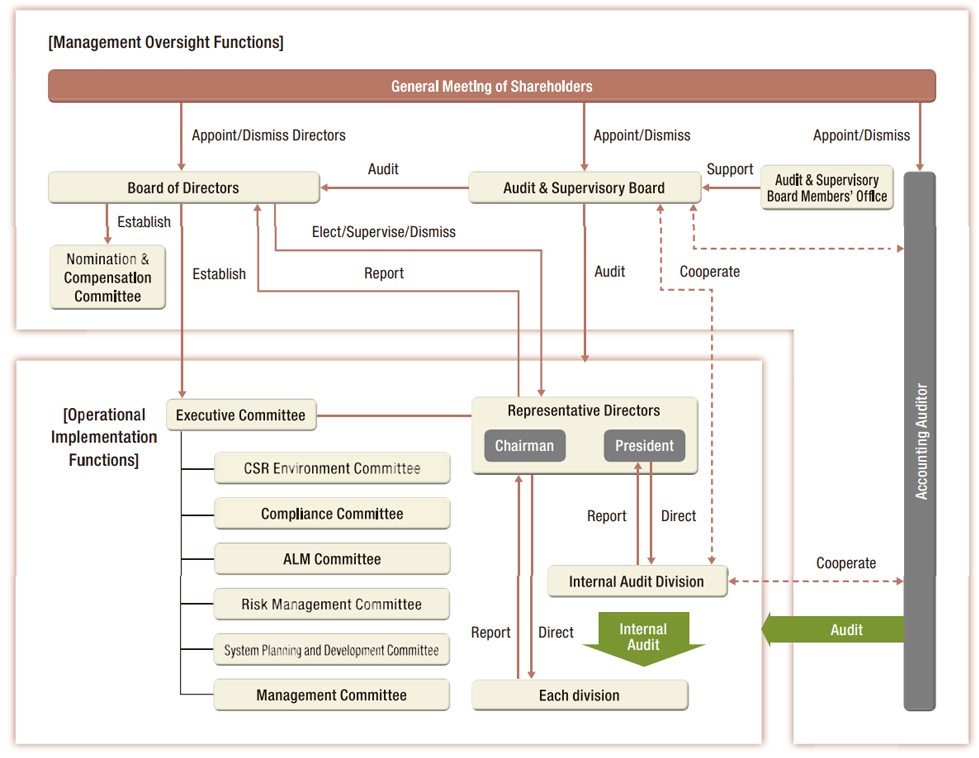 Reasons for Appointment of Outside Officers

In order to strengthen supervision of business execution and accelerate decision making, we will develop and implement a skill matrix in recognition of the fact that the Board of Directors must consist of members with diverse skills and expertise.

Seven & i Holdings Co., Ltd. is the Bank’s parent company, indirectly holding 46.27% of its voting rights, and therefore falls under the category of controlling shareholder stipulated in the Timely Disclosure Rules. When conducting transactions, etc., with the parent company, the Bank will comply with the arm’s-length rule under the Banking Law, which is a rule established to prevent the soundness of the Bank’s management from being compromised through confl ict-of-interest transactions. The Bank fully confi rms the necessity for such transactions and that the conditions of such transactions do not differ signifi cantly from conditions of usual transactions with third parties.

The Bank believes that in order to achieve sound and sustainable growth, it is essential to engage in business development (innovation) by integrating collaboration with various partners to an advanced degree based on our credibility and transparency of management as a corporate entity. Furthermore, we recognize that listing on the market is one of the most effective means to ensure the Bank’s credibility and transparency of management. As an independently listed company, the Bank independently and autonomously deliberates and determines our own business strategies, personnel policies, capital policies, etc., as we engage in our own operating activities. In addition, in order to ensure the necessary independence from our parent company, we have appointed Independent Outside Directors and Outside Audit & Supervisory Board Members (six Independent Offi cers as of June 23, 2020) so that there is no risk of confl ict of interest with general shareholders.
Parent company’s approach and policy regarding group management are as follows: “Although the Company owns the listed subsidiary, Seven Bank, Ltd., from the standpoint of respecting the independence of Seven Bank, Ltd., we value the management decisions of the said listed subsidiary, and respect the independent and autonomous deliberation and determination of its business strategies, personnel policies, capital policies, etc., as it engages in its own operating activities.” (Excerpt from Seven & i Holdings Co., Ltd.’s website)

Furthermore, as is the case with Directors with executive authority over operations, compensation for Executive Officers will also be revised to be consistent with the compensation system and compensation decision process of Directors with executive authority over operations, to further increase their motivation to contribute to the improvement of the Bank’s corporate value and to properly refl ect their accountability for such outcomes in the evaluation of their performance.

The Bank decides compensation of officers based on the following points.

Bonuses, which are provided as short-term incentives, will be determined by multiplying the standard amount of compensation for each job rank by performance-linked factors corresponding to the achievement of consolidated performance targets for the previous fiscal year.

Internal Audit and Audit by Audit & Supervisory Board Members

Internal audits are conducted on all the Bank’s divisions and systems, including those of its subsidiaries. Audits are also conducted on the operations of the Bank’s major outsourcing contractors regarding the status of management by its relevant internal divisions, as well as on the outsourcing contractors themselves, within the scope agreed with them.
Audit & Supervisory Board Members receive periodic reports from the Internal Audit Division on its audit plans and results, and request investigations as necessary to ensure that the audit results of the Internal Audit Division are effectively utilized for internal control system audits by Audit & Supervisory Board Members. In addition, Audit & Supervisory Board Members receive reports on the status of improvement of internal control systems regularly or as necessary from the divisions in charge of internal control functions, and ask for detailed explanations as necessary.

Status of Improvement and Operation of the Internal Control Systems

Concerning the system upgrades stipulated in Article 362, Paragraph 4, Item 6 of the Companies Act, the Board of Directors made a resolution on May 8, 2006, on matters to be implemented by the Bank. Progress of the details of this resolution is reviewed each fiscal year. In line with this resolution, Seven Bank strives for good corporate governance and internal control, while ensuring appropriateness in the Seven Bank Group’s operations.

Details can be found on the following links.